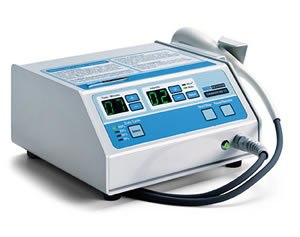 Ultrasound is a very useful modality in chiropractic because it allows heat to be generated more deeply into the body tissues than does any other form of treatment. Hot packs and heating pads are by definition superficial forms of heat, and such deep heating methods are short wave and microwave diathermy, do not send their electromagnetic waves as far as ultrasound and are more difficult to aim and adjust accurately.

Ultrasound waves are generated by electrically induced vibrations from a crystal, but they are mechanical, not electromagnetic waves. They are similar to those employed in fetal scans of pregnant women, tough they operate at different frequencies. When ultrasound waves strike tissue, the tissue vibrates and heats up. In joints the waves bounce off bony surfaces and become even more effective at generating heat. Used when there is no longer any acute swelling, ultrasound can be aimed effectively and is most often employed in the localized treatment of tendinitis, bursitis, and specially bursitis of the hip. The waves will travel right through fatty tissue and muscle to the joint, where they hit the bone and are converted to heat. Muscle tissue is also heated up but only about one tenth as much as bone.

Along with improving blood flow, sound wave vibrations block the formation of adhesions in injured tissue. In treatments an instrument the size of a microphone is applied to your skin and gently moved back and forth with a coupling gel used to help the sound waves through the skin. You may feel some warmth in the area that is being treated, but that is all.

Ultrasound treatments are given in series and are carefully monitored to ensure that excessive and potentially damaging heat is not produced.

It is usually used in conjunction with other therapies such as chiropractic manipulation, myofascial trigger point therapies, exercises and alternate treatments including electrical therapies and laser.